Nepotism and its dangers in the workplace 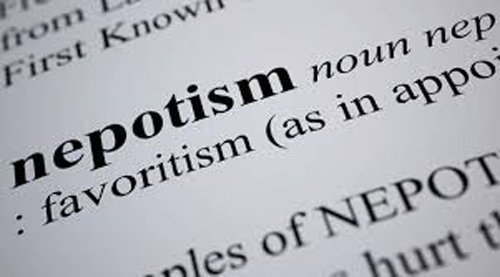 Nepotism in the workplace refers to a form of unfair workplace procedure and/or discrimination, when family members or friends of a manager are appointed into a job vacancy not purely for their skills, experience or knowledge.

Other or possible more suitable candidates are intentionally ignored and/or rejected due to the desire or ulterior motives to appoint a family member or friend for personal gain and/or possible kickbacks. In terms of the Employment Equity Act (EEA) this is a form of unfair discrimination and could lead to favouritism resulting in poor working relationships, lowered morale, dissatisfaction and unfair labour practices.

Is nepotism against the law?

South Africa does have laws that prevent hiring the family members of the politically connected to win work and carry political favour. It probably appears that this is not the case for two reasons.

First, family members of the politically connected have their own lives, qualifications, skills and interests. It would be unfair for the law to ban the hiring of people simply because their family members are politically connected. However, when a person is hired to secure government work and not because he or she is the best for the job, then a line has been crossed and the company that hired them is guilty of corruption.

However, there is no prohibition in labour law to appoint family members or friends. However, it could be an unfair labour practice and/or unfair discrimination in terms of the EEA which makes it then unlawful. It will be considered to be the latter if the appointment is made outside the formal recruitment and selection procedures and practices

In Coega Development Corporation (Pty) Ltd v CCMA and Others (2016) 37 ILJ 923 (LC) the Labour Court found that a senior employee was under an obligation to make full disclosure of her close personal relationship with two applicants for employment before the selection occurred.  She was required to recuse herself from the selection process. Her failure to do so, placed her in conflict with her employer’s interests.

After being charged with conflict of interest amounting to gross misconduct, the employee was dismissed. The Commission for Conciliation, Mediation and Arbitration (CCMA) found that her dismissal was substantively unfair because she was not guilty of misconduct.

However, on review, the Court found that the employee’s actions amounted to serious misconduct. Accordingly, the dismissal was found both procedurally and substantively fair for the following reasons:

The Labour Court said the following:

“It amounts to nepotism and corruption to become involved in the recruitment process of people to whom you feel favourable, in circumstances where you do not make full disclosure.”

Conflicts of interest and nepotism can be avoided when employees remain impartial in all dealings with the appointment of applicants for employment.  Therefore, both employers and employees should be vigilant regarding such practices and the sanctions warranted in the circumstances.

How can you spot nepotism in the workplace?

Nepotism can feel like favouritism and, at its worst, as already alluded earlier, can become a form of discrimination in the workplace.

Nepotism rears its ugly head when the individual hired/appointed is not even qualified. So, was the person hired because he/she is qualified and an excellent fit for the position? Does he/she have years of experience in it or maybe a degree and is getting his/her career started?

Does this individual have valuable social and intellectual capital from years of development for the position (succession planning)? Then, in that case, it is not nepotism.

It is nepotism when family members or friends are not disciplined for evading the responsibilities of their job or not being disciplined consistently for misconduct.

It is also definitely nepotism when employees are not receiving equal or fair performance reviews. In other words, if an employee is provided with more critical feedback than the family member or friend, even if the latter is the one in need of it.

This is a red flag because if the family member or friend are behaving in an unprofessional manner and getting away with it then do not respond in kind. Other employees or co-workers should focus on their professionalism and resist acting out, slacking, telling someone off, or gossiping with co-workers who could repeat their words, all will come back to haunt that co-gossiping co-worker later.

If an employee is overlooked regularly, say, for a specific project, promotion, or salary increase, for a less qualified employee then it is nepotism. In this case, it can make it that much harder for the employee to recognise his/her own accomplishments.

If there are clear, documented guidelines, such as in an employee handbook, or recruitment and selection policy that are not being followed for family members or friends. This provides a strong case for nepotism in the workplace because handbooks or policies are provided for employees and management to follow. If an employee is being disciplined too harshly or not getting a chance for opportunities, the employee is facing discrimination.

8.  Family members do not work their way up

This also goes beyond just favouritism because it hinders other employees’ ability to climb the career ladder in the workplace and stunts those employees’ career growth.

9.  Family members are earning more, maybe even with less experience

Equal pay is an important policy, not just for budgeting purposes, but also for employee morale. Unequal pay cannot be kept a secret. There are ways to address unequal pay, but this is perhaps a topic for another article.

How can you expose nepotism in the workplace?

1.  Document any instances of perceived nepotism

If an employee plans on speaking to the Human Resources Department (HR) when he/she realises that the situation goes beyond the manager playing favouritism. It is best to have notes of important elements. Generic complaints will not get the case very far, so it is important to have details such as dates of exchanges, dialogues and other circumstances regarding any events.

2.  Gather the co-workers’ experiences and impressions

However, this must be done without raising any red flags. Try doing so with some casual chatting at first. Intertwine other cases of nepotism in the workplace into conversations and ask probing questions regarding workplace happiness, workload and treatment from managers.

3.  Prepare for a possible backlash

It is important to prepare for the worst as well. If an employee intends to speak to HR, then that employee must be sure that his/her performance is top-notch just in case of a possible backlash. Remember, this could make that employee a whistle-blower and it could make the employee a target for extra scrutiny, unfair evaluations and not-so-great assignments.

4.  Schedule a confidential appointment with HR

An employee may have reached the time when to circumvent usual procedures, particularly if the employee’s complaint involves any direct managers/supervisors.

There are a lot of myths about therapy, but it is important that the employee who exposes nepotism in the workplace, maintains her/his own stress levels and allow him/herself to have time alone to unwind.

By identifying and reporting nepotism in the workplace, discrimination is being highlighted, which negatively impacts employee morale, job performance and relationships among employees. It may not be an easy step to make but it will make the reporting employee a bolder, braver, more confident employee for standing up for what is right.