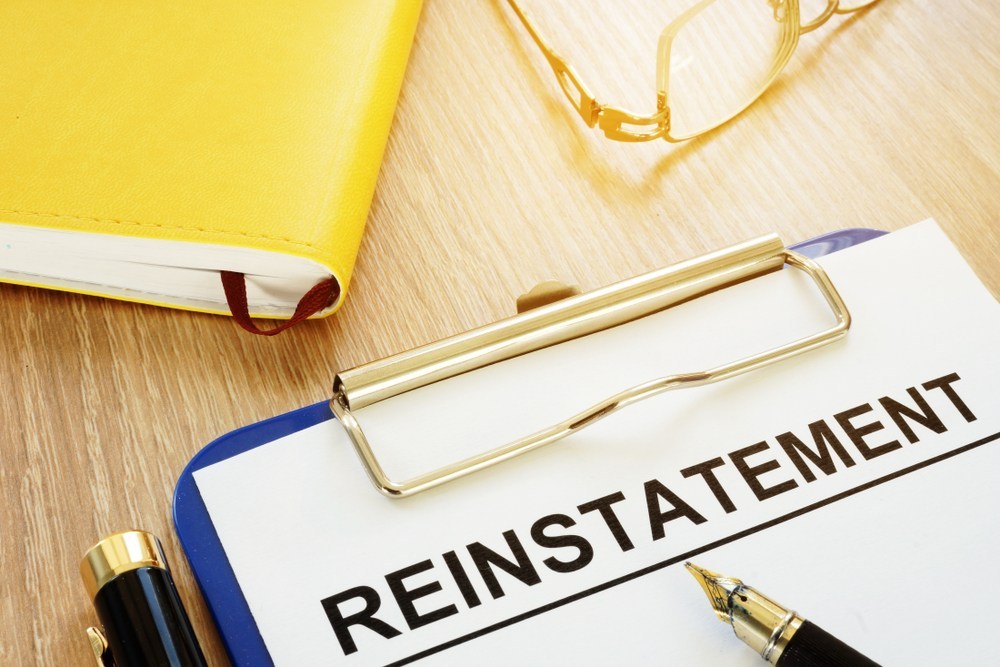 Case law suggests that in its simplest terms reinstatement means the action of giving an employee back a position that he/she has lost OR to put an employee in the same position he/she was in prior to dismissal.

Reinstatement is is not similar to re-employment.

Reinstatement for a dismissed employee, as mentioned, means returning to the position the employee held at the time of the dismissal. In other words, it refers to a legal remedy in which an employee who has been wrongfully terminated from employment is placed back into his/her previous position.

Re-employment may place an employee into a different position, other than the one held at the time of dismissal and/or resignation. In other words, it refers to an employee being appointed into a position after the employee had resigned voluntary or had been dismissed but then at a later time apply for employment which may be in a position different to the one he/she vacated at the time of resignation/dismissal, on different terms and conditions of employment.

In terms of the Labour Relations Act (the Act) there is no set definition for reinstatement therefore it is important to consider court decisions in order to define reinstatement. Effectively this means that the employee will resume his/her position on the same terms and conditions as if the dismissal did not occur.

How is the date of reinstatement defined?

Back pay vs compensation

When reinstatement is not desirable

When an employee is dismissed, the relationship between employer and employee generally deteriorates due to a lack of trust within the relationship. Tensions between the parties might rise making reinstatement of no beneficial effect on either party. Therefore a court or arbitrator cannot force an employee to accept the remedy of reinstatement. The Act has taken this somewhat into consideration. In terms of S193 (2) of the Act, the Labour Court or arbitrator must require the employer to reinstate or re-employ the employee unless:

Best interests of all parties considered

Therefore the court or the arbitrator cannot force the employee to be reinstated or re-employed. The best interests of the parties should be considered when making a decision regarding reinstatement.